As we know the Sigma/Scorpion engine bay is actually quite large and able to accommodate many different engines, from rotary, four, V6 and V8 configurations. But any straight six cylinder is a bit of a tight fit, but it's still possible if you move the radiator forward and place it under the radiator support as opposed to behind it in front of the engine. Scorpions are particularly good for this since it has a slightly longer section in front of the radiator support due to it's longer nose. 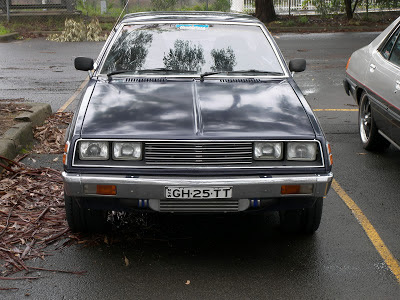 The owner of this particular 1JZ Scorpion had first decided to fit a Chev 350ci V8, which was decided that engine would've made the car unregisterable. It was then decided a Nissan Skyline GTR engine would be the way to go, but that too was the wrong way to go as the engine was a bit too long and high, plus the intake and exhaust are on opposite sides to the stock engines, fuel lines, etc. Third time lucky, the owner decided to go with a Toyota Soarer Twin Turbo 1JZ 2.5lt engine, which ticked all boxes. 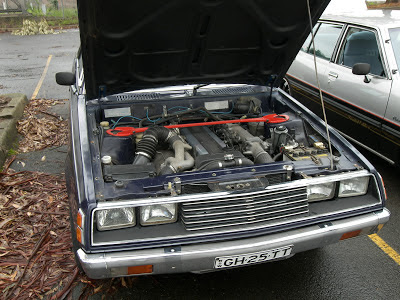 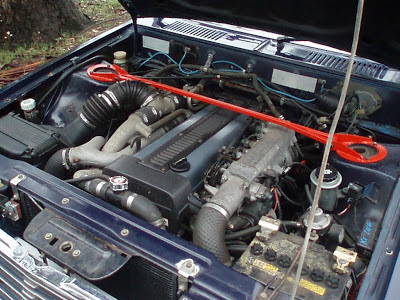 The front brakes have also been upgraded to Ford BA Falcon brakes and the suspension has been upgraded with a VH Commodore Selby 30mm front sway bar, 1.5 inches lower springs all around and the car also runs power steering to help turn the 17 inch Nissan 350Z wheels and 225 (F) and 235 (R) tyres. Photos by turbosigma http://s109.photobucket.com/user/turbosigma/library/Sydney to Wollongong cruise in Feb 2010 and car/build information from Zoom magazine issue 180: 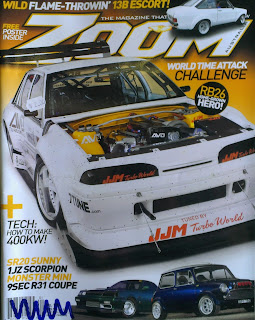 Email ThisBlogThis!Share to TwitterShare to FacebookShare to Pinterest
Labels: Sigmas powered by 1JZs